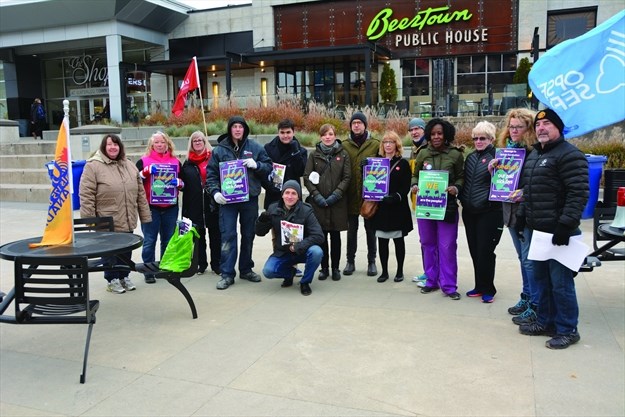 And on a frigid Wednesday afternoon at Waterloo Town Square, members of the union along with concerned citizens gathered at Waterloo Square sending the message: “Hands off workers rights.”

Kelly Dick, who works at the Waterloo Regional Labour Council, organized the rally, which was one of many across Ontario on Wednesday as citizens fight for “$15 and fairness.”

“It’ a direct attack on working people in this province,” said Dick, passionately.

Dick, who also works at Loblaws, rallied the 35 to 40 supporters in attendance with a speech in front of the shops at Waterloo Town Square and was “elated” with the turnout.

Among the changes to the bill include freezing wages at $14, as opposed to the planned increase to $15, as well as other changes to the Liberal government’s Fair Workplaces and Betters Jobs Act.

Dick, who has a “very vested” interest in the bill, also is a part of the Ontario Federation of Labour, and the Canadian Labour Congress.

There will also be changes to the personal-leave rule for workplaces instituted by former premier Kathleen Wynne’s Liberals. The current rules, workers are allowed to take 10 days while two of them are paid. Under Doug Ford’s plan, workers would receive eight emergency days; two for bereavement, three for family responsibilities, and three for illness.

“(He’s) not only telling you now, as workers in Ontario, you can have eight days. But he’s dictated what you can use those days for,” said Dick. “Disgusting. Why should anyone be allowed to tell us what we’re using our personal emergency leave days for?”

“Doug’s campaign slogan was for the people, I’m not sure what people he’s for. I can tell you one thing, it’s not certainly the people standing here today, it’s certainly not your average Ontarian, it’s certainly not anybody whose not making a six or seven-figure income, it’s certainly is not somebody that does not own a company or a business. I don’t understand why one government thinks that it needs to rip and shred everything that another government did, it just didn’t make any sense to me. It’s a waste of money, it blows money, and not everything that the other government did was bad, honestly.”

Catherine Campbell, a mother of four in K-W specifically asked to be on record, was a passionate advocate against the PC government’s repeal.

“I kept saying to myself before I left my house, Doug Ford is evil, even though I already told it to myself,  I just said he’s an evil, he’s an evil man, how dare he do this to all these people,” said Campbell, who is also belongs Fair Votes Canada, a nonprofit citizen movement for electoral reform.

Campbell says her daughter, who works in a restaurant, sees plenty of her co-workers come into work ill, and this will only increase due to Ford’s cutbacks.

Dick explained that if the petition in present at the rally gets 50 signed petition sheets, it will be taken to the local PC MPP's, who can read it out in the Ontario legislature.