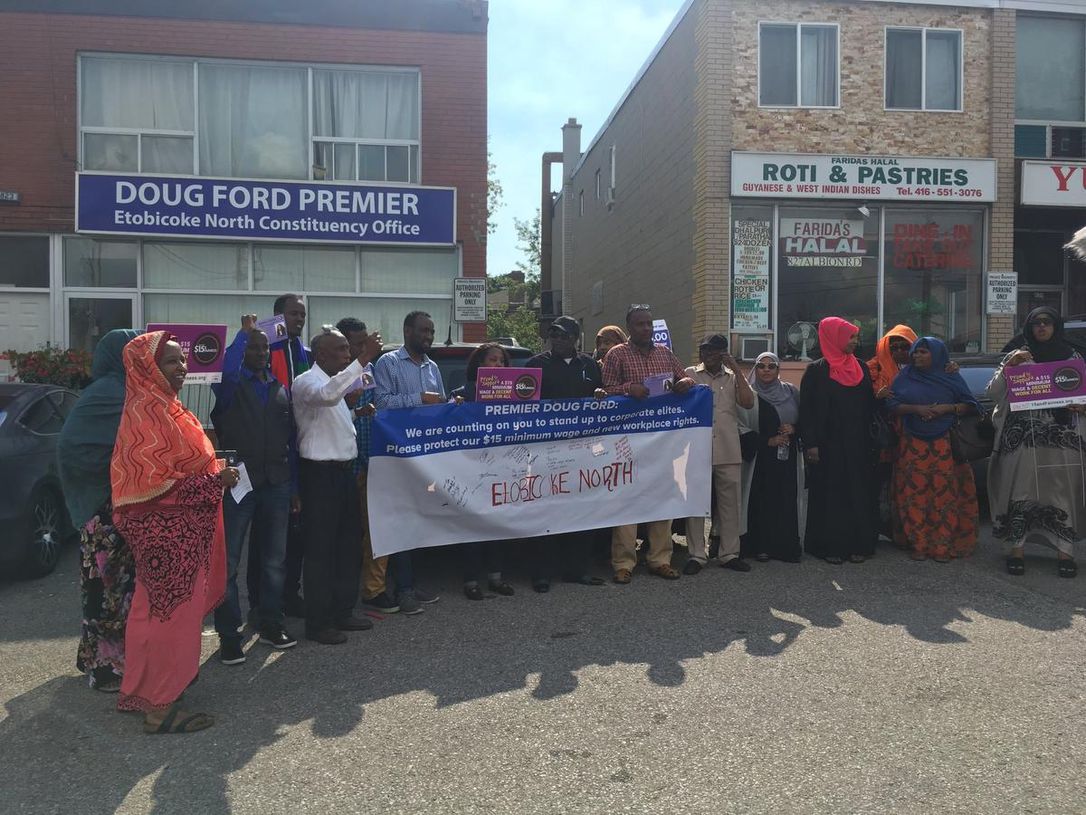 Workers rallied in support of a $15 minimum wage, across Toronto and 15 other cities Saturday, as the Ontario government doubles down on its pledge to cancel what it’s calling a “crassly political” wage bump scheduled for January 2019.

“We cannot survive below $15 an hour,” said valet driver Abdullahi Bare, 65, who attended one rally of about 50 people at Premier Doug Ford’s constituency office. Eight other rallies were scheduled to take place across the GTA.

“We have to work two to three jobs. We cannot meet with our family. You come home to sleep only. It’s a very difficult life,” Bare said.

The legislation introduced last year under Liberal premier Kathleen Wynne resulted in a $2.60 increase in the minimum wage to $14 an hour in 2018, and $15 by 2019, and also introduced sweeping labour reforms aimed at tackling precarious work.

Premier Doug Ford has previously said he will freeze the minimum wage at $14 an hour. In an opinion piece for the Financial Post published Friday, Labour Minister Laurie Scott said her government would stick to that promise, describing the 20 per cent increase as “crassly political” and “the highest and fastest in our history.”

“As minister of labour, I always favour higher wages. Incomes should never stagnate. There is a need for the minimum wage to increase as the cost of living goes up. Unfortunately, the previous Liberal government chose to put the burden of an abrupt and dramatic increase on the back of our small businesses,” Scott said.

Increasing the minimum wage was outside the scope of the two-year review of provincial labour laws leading to The Fair Workplaces, Better Jobs Act, known as Bill 148, but numerous anti-poverty and worker advocates made submissions to the process supporting the move.

A group of Canadian economists also endorsed the wage bump in an open letter to government that said it “makes good economic sense” and could generate “substantial benefit to low-wage workers, their families and the economy as a whole.”

The Ontario Chamber of Commerce has called on the new provincial government to repeal the entire bill, including 2019’s minimum wage hike, because it has created a “number of compounding changes that created greater administrative and financial pressure on employers.”

Earlier this month, a ministry spokesperson told the Star that Scott was “considering the recent changes made” in Bill 148 and “their impact on the overall economy.”

Naiima Farah, who is running for city council in Ward 1, Etobicoke North, and has lived in the area since she was three years old, said the minimum-wage increase was a “start to breaking the cycle of inter generational poverty.”

A study by the province’s economic watchdog, the Financial Accountability Office, also predicted about 50,000 people could lose their jobs due to the minimum wage increase. In her Friday op-ed, Scott said Ontario lost 59,300 part-time jobs immediately after the minimum wage “surged up” to $14 from $11.60.

In July, the province’s jobless rate fell to 5.4 per cent, the lowest in 18 years. In August that figure increased to 5.7 per cent with a loss of 80,100 jobs, most of which were part time. Year over year, the unemployment rate is unchanged.

A study by the Canadian Centre for Policy Alternatives found that a minimum-wage increase to $15 an hour would mean an extra $1,465 in the pockets of the working poor, as compared to Ford’s plan to freeze the rate at $14 and eliminate provincial income taxes on those making less than $30,000. The report found that two-thirds of the 4.9 million Ontarians making less than $30,000 already pay no income tax.

In 2015, the Ontario Living Wage Network calculated Toronto’s living wage as being $18.52.