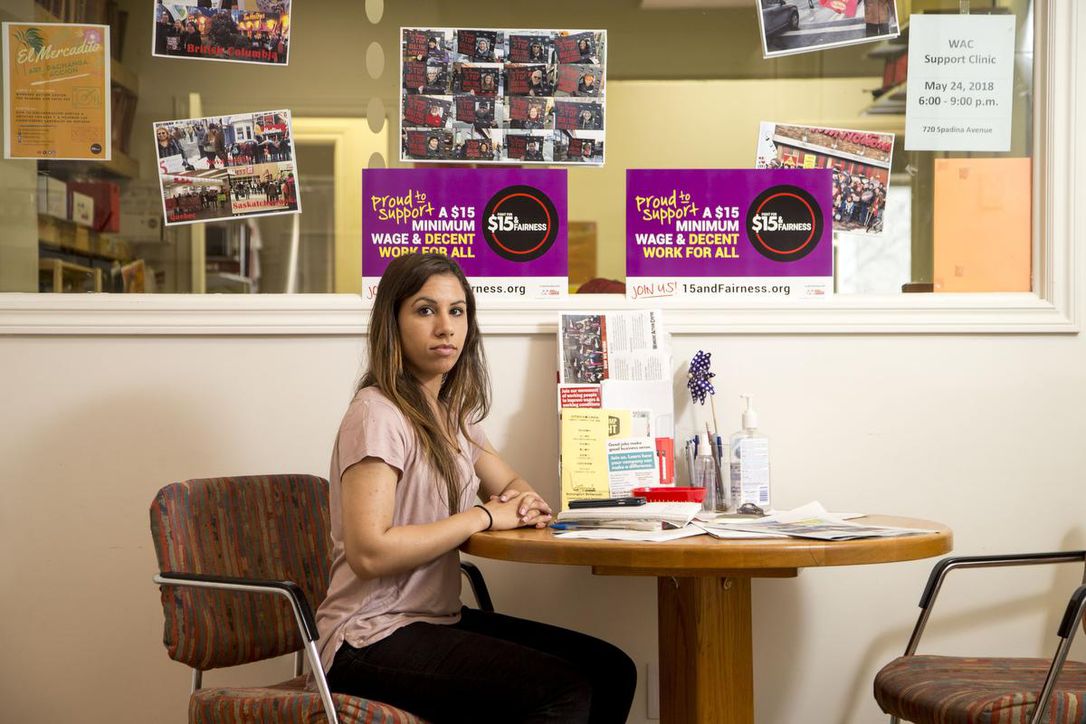 Job creation is an evergreen campaign promise, but as for your rights on the job — well, they don’t tend to be a wedge issue.

That’s what Navi Aujla hopes to change this time around.

“I think there’s a lot of myths around, if we increase the quality of jobs it’s going to lead to job loss. I think it puts a fear in folks that asking for what we deserve is going to put us out of work,” says the 26-year-old organizer with the Fight for $15 movement.

Low pay and temp-agency work are common in her community, the Brampton native says. She’s experienced it first hand — and wants political candidates to take note.

“At one factory we were made to race against each other and you feel like you have no choice to try and win that race because they may not call you back,” she recalls. “There’s constant threatening going on — ‘if you don’t make this many pieces, we’re not going to call you back tomorrow.’ ”

Around one-third of Ontario’s workforce are vulnerable workers in precarious employment, according to a report by two independent special advisers appointed by the province. A study by the Canadian Centre for Policy Alternatives (CCPA) found in 2015 that Ontario’s low-wage workforce grew by 94 per cent over two decades, vastly outstripping the growth in total employment, which grew by 30 per cent.

After a two-year review of the province’s labour standards, the Liberals prefaced election season with reforms tackling precarious work, including a pledge to increase the minimum wage to $15 an hour by 2019, starting with a boost from $11.60 an hour to $14 in January.

Bill 148, introduced in November, represented the most significant changes to Ontario’s employment laws in decades. It mandated equal pay for temp, casual and part-time workers doing similar work to permanent employees, provided all workers with a minimum of two paid emergency leave days, and gave them the right to refuse a shift if the request is made with less than four days’ notice. It also doubled the Ministry of Labour’s complement of employment standards officers to improve enforcement.

Rising labour costs led some in the business community to warn that wage increases would lead to job losses. So far, Flynn says, that has not come to pass. Employment in Ontario increased by 10,600 jobs in March with a gain in full-time positions.

“Jobs are still being created,” he said.

If elected, Flynn said his party will continue to review the existing “patchwork” of exemptions to Ontario’s workplace laws that leave some professions without any basic protections, a process that kicked off after Bill 148 passed in November. He says he’s also committed to improving occupational disease victims’ access to workers’ compensation, and to looking at ways to reduce violence against workers in the health-care and education sectors.

Like the Liberals, the NDP have committed to a $15 hourly minimum by 2019, and say they will remove exemptions for students and liquor servers who currently make a lower minimum wage.

Their platform promises three weeks’ holiday to every worker. (The Liberals introduced a new three-week entitlement for employees with five years of service at a company.) The NDP has also pledged to set up a task force to “remove barriers between injured workers and the compensation they deserve,” and to reintroduce card-based certification to make it easier for workers to unionize. Unlike the Liberals, the party says it will not use back-to-work legislation to end strikes.

“We need to address the holes (precarious work) creates in the ability of people to stay healthy,” she told the Star.

“They talk a good game about there being lots of jobs,” Horwath said of her rival parties. “But is the economy really working for people?”

The Greens, meanwhile, note that the province’s social safety nets “were not designed for an economy with so many contract, freelance, precarious and temporary jobs” and offer up a guaranteed basic income as one solution — an approach advocated by some precarious-work experts and piloted in Ontario by the Liberals.

“A Basic Income Guarantee will provide the economic security people need to be entrepreneurs, to be able to afford retraining or to experience gaps in work without falling into poverty,” the Green platform says.

Progressive Conservative Leader Doug Ford has said he will freeze the minimum wage at $14, and will instead eliminate provincial income tax for everyone earning below $30,000.

Income taxes are partly levied by the federal government, so Ford’s plan could only eliminate the provincial portion of low-wage earners’ income tax.

The party’s platform, released Wednesday, also says a Ford government would reform the province’s foreign credential recognition process to “help qualified immigrants come to Ontario and contribute to the economy to their fullest potential immediately.”

In response to a question asking if the Progressive Conservatives would keep intact the other worker protections introduced in Bill 148 — including equal pay for temps and paid emergency-leave days — Lantsman said a PC government “will work with businesses and unions to ensure that these changes work for everyone.”

According to an analysis by the CCPA, a higher minimum wage as promised by the Liberals and NDP leaves low-wage workers $1,500 richer than they would be under Ford’s taxation plan.

Economist Armine Yalnizyan, who recently co-authored a report called Race to the Top, which tackles how to make economic growth inclusive, says the Ford platform offers a narrative that may be comfortingly familiar — cut taxes and let businesses generate jobs and prosperity.

But she says the trickle-down growth mantra is a “social experiment that failed to deliver on its own terms,” given rising inequality and job insecurity across developed economies.

“There are a lot of people who are preaching the zombie policies of the 1980s and ’90s,” Yalnizyan says.

She sees two policies as being the real key to a better life for workers. One is a decent minimum wage — one that is “anchored at 60 per cent of the average wage.” (By this measure, even the proposed $15 minimum wage would be $1.50 shy of the mark.)

The second is sectoral or broader-based bargaining. In North America, unions have traditionally operated workplace by workplace. In broader-based bargaining, workers and their representatives negotiate with business leaders to set minimum working conditions across an entire sector. This would go farther in providing basic protections for all workers in the sector — and level the playing field among business competitors, Yalnizyan argues.

“Sectoral bargaining can become a friend for both workers and businesses, and eliminate the real exploiters in the system who actually make it hard for good employers in those sectors,” she says. “I see sectoral bargaining as a real promising future if we are to make every job a good job.”

She’s hoping to see stricter regulations around how long workers can be kept in temporary positions before being made permanent, stronger scheduling protections, and an elimination of current exemptions to the Employment Standards Act that mean some workers aren’t entitled to the minimum wage.

A minimum wage boost will put money back in the pockets of those most likely to spend it locally, she says

“Right now workers who are making minimum wage are barely getting by. Even at $15 (an hour). it only puts workers who are working full time at 10 per cent above the poverty line.”

“It’s really important to elect people who are going to have our backs in this election because we could lose all the things that we’ve won,” she adds.

“And we know that along with all the things we’ve won, there’s a lot more that needs to be changed.”