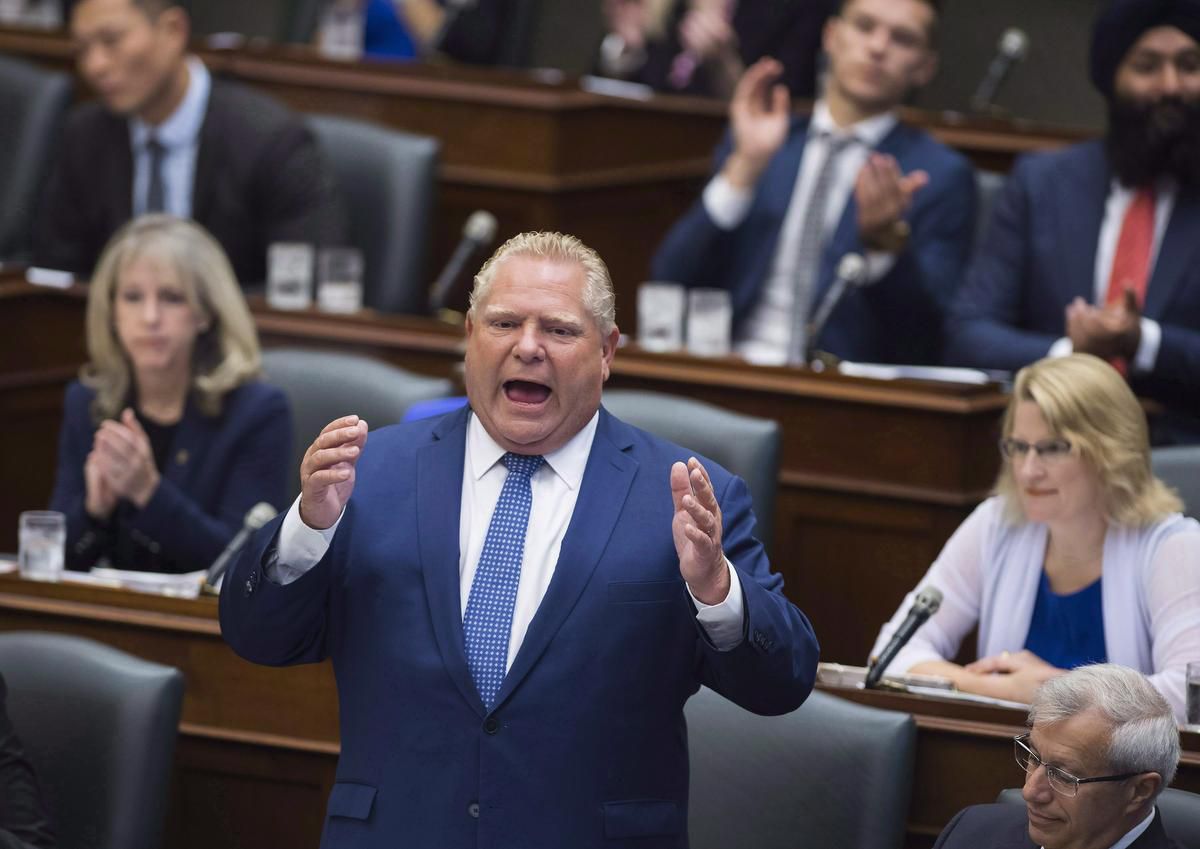 Two paid sick days are too much.

That was the message Tuesday from Premier Doug Ford, who is poised to dismantle the previous Liberal government’s labour reforms that increased sick day benefits and paid vacation, and were set to raise the minimum wage from $14 an hour to $15 on Jan. 1.

“We’re getting rid of Bill 148,” Ford thundered in the legislature after being questioned by Liberal MPP Michael Coteau.

The premier added that “60,000 people lost their jobs under Bill 148,” an apparent reference to part-time positions that have been cut.

“When I criss-crossed this province, I talked to the peoplewho earn minimum wage, the ones who even were able to keep their job. I’d go into a little Home Hardware. Rather than having seven employees, they’d cut three employees because of Bill 148,” he said.

“We’re going to create more jobs so we can hire more people, unlike the Liberals, who destroyed this province.”

Later Tuesday, Ford said alarm over his remarks shouldn’t come as “any surprise” given his comments on the reforms during the spring election campaign, and he promised more details “over the next few weeks.”

On a year-over-year basis, employment increased by 1.1 per cent, or 79,000 jobs, in Ontario in August, according to Statistics Canada. Total hours worked across the province also increased after much of Bill 148 took effect in January.

To repeal the legislation, the government will need to introduce a replacement bill. Deena Ladd of the Toronto-based Workers’ Action Centre said she was “waiting for more than just a comment in question period to actually take the government seriously at this point.”

“I think everyone is really kind of appalled that they would consider getting rid of basic labour legislation,” she said. “They’re just talking about it and I think they’re evaluating the response they’re getting from the people in the province.”

The legislation represents the most sweeping change to the province’s labour laws in decades, and was implemented after two years of research and public consultation conducted by two independent labour experts. About one-third of Ontario’s workforce are vulnerable workers in precarious employment, according to the final 400-page report written by the two experts about proposed labour reforms.

Coteau was incredulous that Ford would effectively throw out the baby with the bathwater in his bid to cancel the minimum wage increase by getting rid of all the reforms in Bill 148.

“I think it’s reasonable that workers be given fair notice for compensation when their employer cancels their shift,” said the Liberal MPP for Don Valley East, a former cabinet minister.

“It allows employees to have some stability in their schedule if they’re going to school, to ensure they have adequate child care and if they’re working a second job.

“Some 1.6 million Ontarians do not have sick days. In the legislation it guarantees two days to Ontarians. This is about decency for employees,” Coteau added.

At a news conference last week in support of the $15 minimum wage, currently scheduled to kick in on Jan. 1, Toronto-based emergency room physician Dr. Edward Xie said paid sick days were “not just an improvement to labour standards, but also a major public health advance.”

At least 145 countries, including 23 jurisdictions in the United States, give workers the right to be compensated when they’re ill.

NDP Leader Andrea Horwath said “it’s unfortunate we have a government now that’s going to drag us backwards likely to a place where people are not going to be able to get a fair shake at work.”

“I’ve met guys who stop me literally on the street canvassing ... and say they’ve worked at the same employer for over 20 years and still only get two weeks vacation. Really? I mean, it’s time to make those changes,” Horwath said.

Chris Buckley, president of the Ontario Federation of Labour, said worker advocates had fought “long and hard” to make improvements to the province’s “severely outdated” labour and employment laws.

“I caution the premier and today’s government not to eliminate Bill 148,” he said. “As a labour movement, we’re not going to sit idly by.”

But Rocco Rossi, president and CEO of the Ontario Chamber of Commerce, praised Ford.

“We have been persistently urging the government to take immediate action and repeal Bill 148 due to the compounding labour reforms which come at too high a cost to the economy and workers,” he said.

“The very real unintended consequences have forced our members to decrease product offerings and increase the price of products being sold, hire fewer employees, reduce services and hours of operation, cut back on employee benefits and halt capital investment — all in an effort to stay afloat.”