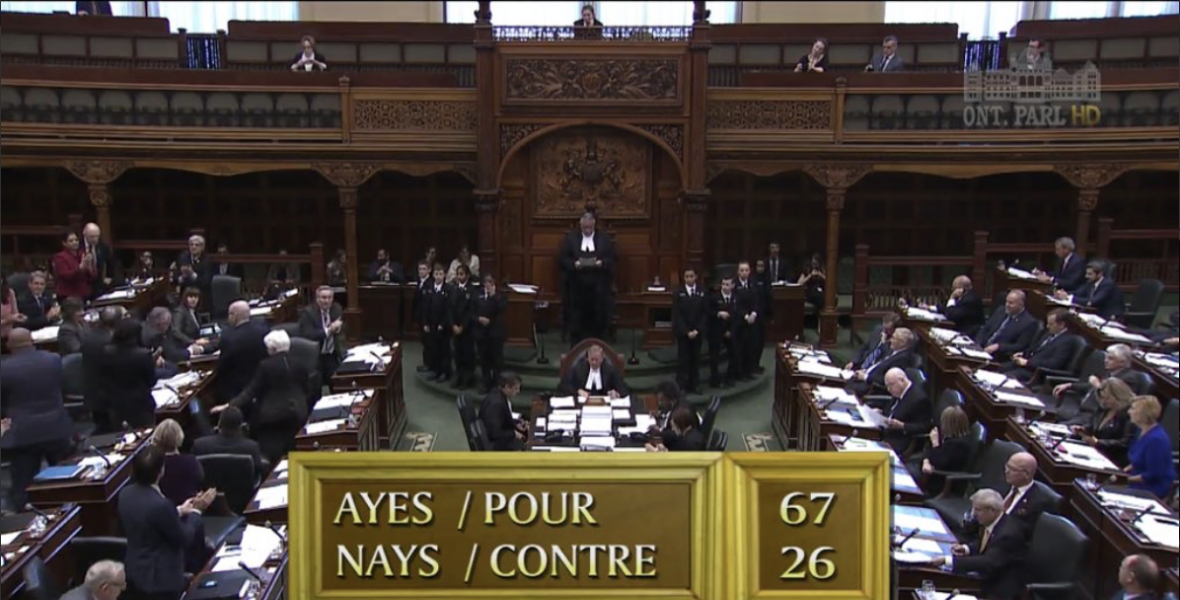 The Liberals and New Democratic Party supported the bill. The Progressive Conservatives opposed it. The law comes in response to the Changing Workplaces Review, an examination of the ESA and LRA, which concluded in May.

All workers now get 10 days of emergency leave each year, the first two paid. Employees are eligible for these days after one week of work. Before, only workers at companies with more than 50 workers had 10 days of guaranteed leave, none paid. Employees don’t need a doctor’s note to get these days off.

The law creates a separate leave if employees, or their children, are experiencing domestic or sexual violence, or the threat of it. Employees can take 10 individual days and then another 15 weeks off work to find new housing, or attend legal, medical or counselling appointments, among other things. The first five days each calendar year are paid.

Employees will be paid the same for doing the same job, regardless of whether they’re hired as part-time, temporary, casual, seasonal or full-time. This also applies to employees hired through a temporary help agency (THA). Employees at THAs must receive one week’s notice when an assignment of at least three months will end early.

The LRA was changed to expand card-based union certification to those working in temporary help agencies, building services, homecare and community services. The construction industry has had card-based certification for years.

“The only way” to get rid of precarious work is to make sure everyone has access to a union, said Debora De Angelis, the Ontario director for the United Food and Commercial Workers (UFCW), a union that represents many retail and food services workers. Card-check needs to be extended to retail workers, De Angelis said. Many of them work several part-time jobs to make ends meet and don’t have benefits or pensions. Most retail workers, she said, are women.

De Angelis questioned why construction workers can have card-based certification while others don’t. “If it’s good for the goose, why isn’t it good for the gander?”

De Angelis said she’s interested to see how other changes to the LRA could benefit workers, especially those like cafeteria workers, whose services are often contracted out. Right now, when a contract expires, employers often hire companies that charge less. This means employees, some of whom may belong to unions, lose their jobs after a sale.

But changes to the LRA mean workers in building services, food services, and security services, can still have their rights protected after a sale. This could include cafeteria workers, a ministry of labour spokesperson confirmed.

Changes like this may not be “groundbreaking,” said Sheila Block, senior economist for the Canadian Centre for Policy Alternatives, but they do give more stability for some precarious workers.

Everyone needs access to increased minimum wage, especially because fewer people are joining unions, said Block. The ESA gives a minimum standard for everyone.

Minimum wage became “symbolic” of issues about fairness and workers’ rights, said Deena Ladd, coordinator at the Workers Action Centre, one of the leaders in fight for changes to the law. Ladd said she’d like to see more: increased paid emergency leave, greater protection for temporary agency workers and card-certification for everyone. This wasn’t a “one-issue” campaign, she said; there were dozens of issues that needed to be addressed.

It was not part of the Changing Workplaces Review’s mandate to discuss minimum wage.

Ladd said the centre chose to ignore that restriction and mentioned the need for increased wages in all its submissions, calling it “fundamental” to discussions about precarious employment and poverty. Not all political parties agreed with it, but they couldn’t stop the tide of support for the increase, she said.

The fight for workers’ rights has not ended. “From here on in, decent work should be considered the new normal for Ontario. This government has raised the bar,” Rizvi said in a statement from Unifor. “Any political party who does not support Ontario workers will not be getting our votes in June 2018.”

Chris Buckley, president of the Ontario Federation of Labour, said the passing of the law was a “good day for workers and their families,” but added that unions will continue to push for card-based certification in all sectors.

Ladd said the Workers Action Centre will lobby for greater protection for temporary agency workers, so employers are held responsible when these workers are injured on the job. She described many employment agencies as “fly-by-night” organizations. They often only have a post office box and lack fixed addresses. She said she hopes it becomes so difficult for employers to hire workers from temporary agencies that they are forced to create full-time jobs.

Bill 148 did not remove industry-specific exemptions in the ESA. These exemptions mean rules about overtime pay or standard hours of work, among others, don’t apply to many workers. Ladd said only about 24 per cent of workers are fully covered by the ESA. The Ministry of Labour announced it will be reviewing these exemptions. The first phase of the review ends on December 1. It includes reviewing exemptions for domestic workers, homemakers, residential care workers, janitors, superintendents, caretakers, architects, IT professionals, managers and supervisors and pharmacists.

The law also did not expand the definition of “employee” in the ESA to include “dependent contractors,” although they are listed in the LRA.

The new laws do little to help workers in the “gig economy”, or tighten the loopholes about who can be considered an “independent contractor,” said Lise Lareau of the Canadian Media Guild (CMG). Many media workers go from contract to contract. Some, including workers in documentaries or reality TV, are exempt from employment laws. The all-media union has launched a petition asking for exemptions to the TV and film industry to be among the next industries reviewed. Lareau said she’s “cautiously optimistic” the government will review the sector. She has been organizing a campaign to organize factual TV workers for years.

The government will also hire up to 175 employment standards officers to educate business owners about their responsibilities. Ladd said the Workers Action Centre will launch an awareness campaign for workers in the new year.