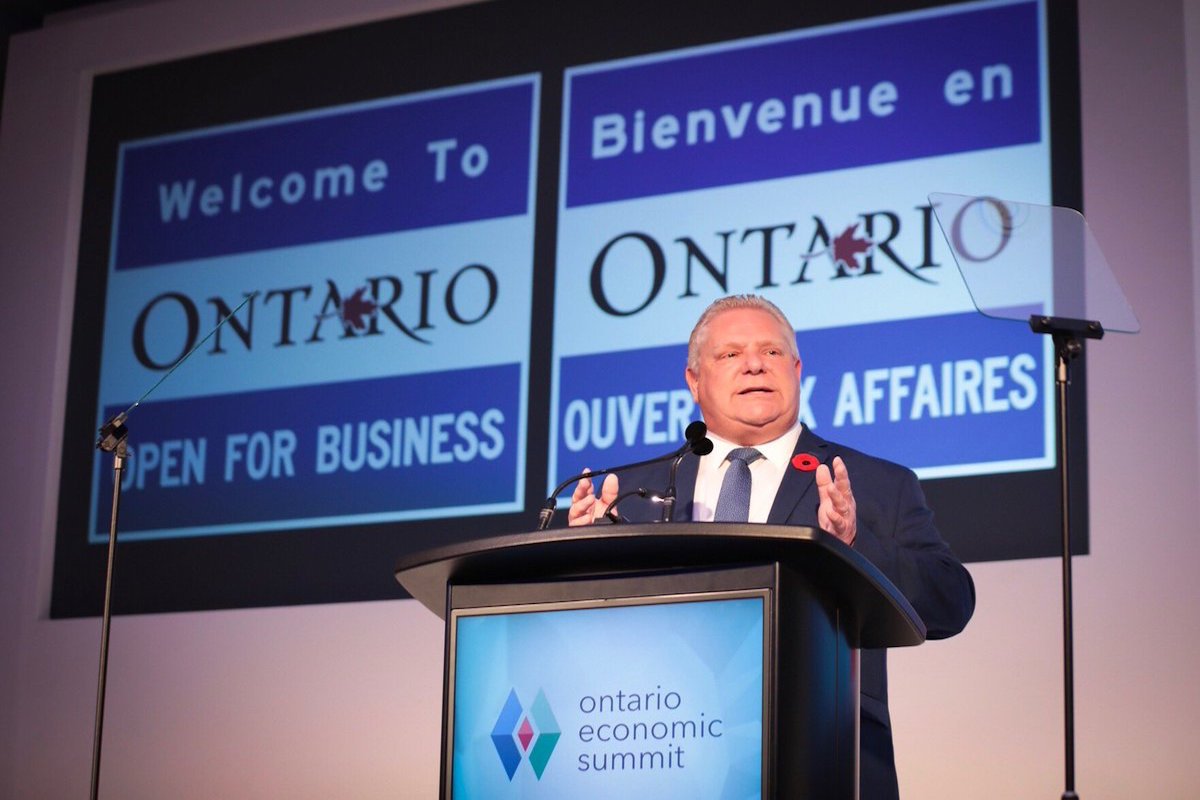 Open for business? The Ford government and their big-business lobbies blame the introduction of a $14 minimum wage for the loss of 90,000 jobs in Ontario, but that's not what the real economic numbers show

Since Doug Ford made his campaign threat to dismantle Liberal labour reforms (Bill 148), there have been almost daily rallies and social media campaigns as part of a province-wide resistance movement on precarious employment.

Last week, Ford followed through on his warning, killing plans for a $1 increase in the minimum wage to $15 an hour, among other measures, in the name of “efficiencies.” The Bill also introduced changes to vacation entitlements, paid sick days and equal pay rules.

The Ontario Chamber of Commerce (OCC), Retail Council of Canada, Food and Beverage Ontario and temp agency lobby group ACSESS (Association of Canadian Search, Employment & Staffing Services) have all been calling for the Ford government to quash the bill.

“We have been persistently urging the government to take immediate action and repeal Bill 148 due to the compounding labour reforms, which come at too high a cost to the economy and workers,” reads an OCC press release that was regurgitated verbatim in the legislature by Economic Development Minister Jim Wilson.

Labour minister Laurie Scott made the same claims in an op-ed in the National Post in September – “our province’s largest monthly job loss in a decade. Every single one of those lost jobs was a part-time job.

“Unfortunately, the previous Liberal government chose to put the burden of an abrupt and dramatic increase on the back of our small businesses,” Scott wrote.

Yet Statistics Canada figures show that employment in Ontario’s service sector grew by 1.3 per cent at a slightly higher rate than the national average of 1.2 per cent over the last 12 months.

“This means that the total number of hours worked grew at nearly double the rate,” reports Canadian labour news website rankandfile.ca. “This is the exact opposite of what the Chamber of Commerce is claiming is happening.”

Rankandfile.ca has called out the Ford government and big-business lobbies for “repeatedly twisting the facts on job numbers to attack the minimum wage.”

The claim is backed by Scotiabank, which stated in its February economic review that “there is no discernible evidence of a minimum-wage impact on hours worked in Ontario. Employment losses in the province in January were not concentrated in ‘minimum-wage’ industries.”

Similarly, the National Bank of Canada’s August survey of employment, payrolls and hours found that “employment in the country’s largest province is rising at the fastest pace in years, faster than the national average.”

A Globe and Mail opinion piece authored by four research economists from universities across the country points out that in three states and dozens of U.S. cities that have adapted “living wage” policies, “there is no credible evidence that this clear trend in labour policy is hurting job creation.”

Gilleen Pearce, a small business owner and coordinator with Better Way Alliance, a network of employers that support a living wage, says the Ford government is misrepresenting the business community’s views on Bill 148.

Most Ontario businesses support a $15 minimum wage or higher, she says, “For the simple reason that either they were already paying more or they understand that you get and keep better employees if you pay better.”

Bill 148 was a rewrite of outdated Ontario labour legislation, which came under scrutiny after years of grassroots pressure for a living wage culminated in the province-wide $14 Now campaign in 2013.

After two years of public consultations, special advisors leading “the largest review of Ontario’s labour laws conducted in decades” concluded in the 400-page Changing Workplaces Review report “that there are too many people in too many workplaces who do not receive their basic rights.”

“We campaigned for much more comprehensive change,” says Pam Frache, who works out of the Workers’ Action Centre, “a union for non-union workers” on Spadina. “But we were very happy with the recommendations that were made.”

Frache says that for business lobbies to now say there has been no input and that Bill 148 is “too much too soon” is disingenuous.

Frache says that during the review, many progressive businesses across the province spoke out. “These are employers who really believe that paying decent wages, treating workers with respect and dignity on the job is actually key to their success.”

A 2016 Ryerson University study found temporary and on-call agency employees reported “a collective sense of unpredictability, lack of control over one’s schedule and inability to plan that permeated participants’ work and family lives.”

The study, A Public Health Crisis In The Making: The Health Impacts Of Precarious Work On Racialized Refugee And Immigrant Women, reported that “many participants had weekly incomes that added up to much less than the hourly minimum wage if averaged over the week.” And that “participants lived in constant fear of not getting enough hours of work. Participants said they could not afford to fall sick because it would mean lost wages. Many said that if they were sick for more than a couple of days, they were quite likely to lose their job.”

“It’s a health issue,” says Frache. “All the evidence shows that.” Try telling it the Ford government.