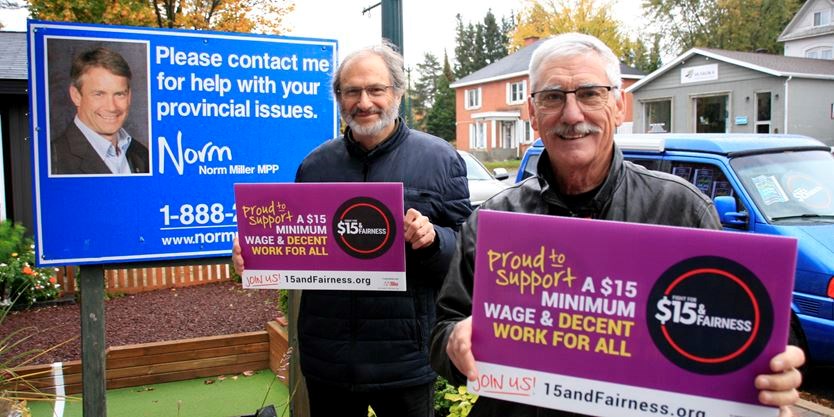 MUSKOKA — Demonstrators clutched their signs and stood in front of Parry Sound-Muskoka MPP Norm Miller’s office in Bracebridge despite rain on Monday.

Diana McConnell, organizer of Parry Sound-Muskoka Decent Work in support of Fight for $15 and Fairness, said the demonstrators wanted to build momentum in the region for a $15 minimum wage and better laws to protect workers, despite the PC government’s plans to repeal Bill 148.

The bill, brought into law by the previous provincial government, would have raised the minimum wage to $15 by January 2019, while also providing personal emergency days for workers, more financial fairness for part-time, temporary, casual and contract workers, additional health and safety oversight, and more.

Demonstrators argued anyone working full-time should have access to a living wage, while noting low wages often disproportionately affected women, many of whom fill minimum wage roles, especially in the service industry.

Petitions that called on the provincial government to honour and enforce Bill 148, “to ensure no worker is left without protection,” were available at The Hub, 1 Crescent Rd., Huntsville, and YWCA Muskoka, 440 Ecclestone Dr., Bracebridge.