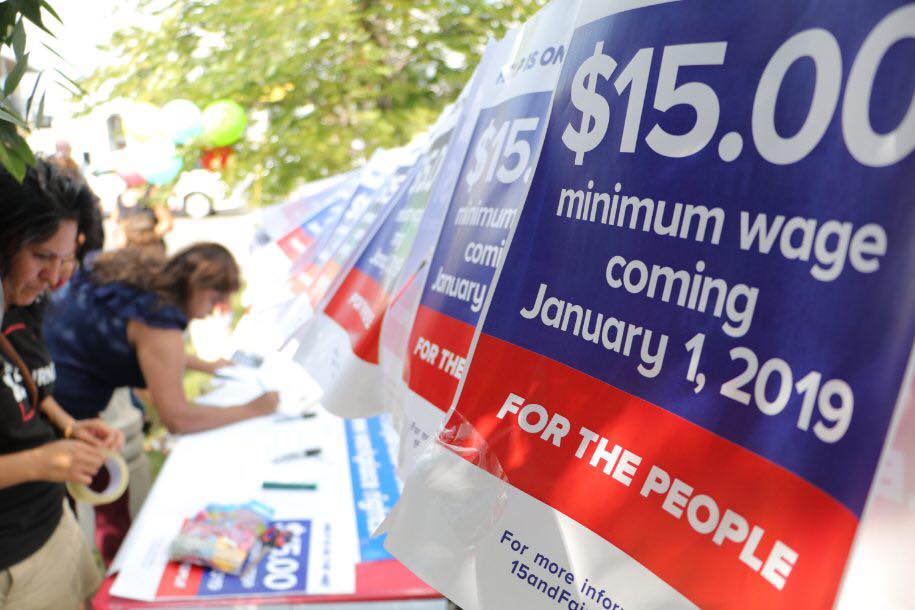 TORONTO, Sept. 15, 2018 -- Constituents in more than 20 Ontario ridings called on their local Conservative MPPs today to oppose calls from Big Business to scrap the $15 minimum wage.

Almost two million workers are counting on the $15 minimum wage which is scheduled to take effect on January 1, 2019. Public opinion surveys show that 66% of Ontarians support a $15 minimum wage and many believe it should be even higher. A similar percentage of small business owners – 62% – also believe the minimum wage should be at least $15 an hour.

Despite this fact, the Ontario Chamber of Commerce has called on Premier Doug Ford to fully repeal the legislation that made Ontario the first jurisdiction in Canada to provide two paid sick days to all workers, unpaid emergency leave, in addition to fairer scheduling laws and a $15 minimum wage taking effect January 1, 2019.

Christine Ilott, who lives in York Region, wants her MPP to do the right thing: “Working for minimum wage is a struggle. I’m a college graduate. I'm in my mid-40s. I live alone. I have the same bills most families do, and I struggle to pay them. That's with four jobs across the GTA. All my jobs are minimum wage. Last year I earned in the vicinity of $22,000. You can’t live in Toronto on that. You can’t live anywhere in Ontario on that. You just can't. I'd like to say that's after taxes, but the truth is I don't earn enough to pay taxes. Two-thirds of minimum wage earners don't.”

Jared Hunt, an education worker in North Bay, says he was shocked to hear the Ontario Chamber of Commerce wants the government to take away paid sick days and eliminate the minimum wage increase. “I thought the Chamber represented community interests, but now it seems they are simply parroting the big corporations that make millions of profit while paying sub-poverty wages,” he said. “Taking away the new workplace rights will harm our communities. It will affect parents and children – the kids who sit in our classroom – they will suffer the consequences of rolling back labour laws.”

Navneet Aujla, lives in Brampton, and was part of the delegation that visited MPPs Prabmeet Singh Sarkaria and Amarjot Sandhu. She says repealing Bill 148 would mean reversing new regulations for temp agencies. “That would be a disaster for workers in our community. We already have an incredibly high concentration of temp agencies in Brampton and for many workers these agencies are the main source of employment. The equal pay provisions of the new legislation – where temp agency workers have to be paid the same as their directly-hired co-workers – have made a huge difference in workers’ lives. Not only are these workers now making more money, many have been offered permanent jobs because the financial incentives for employers to keep people temporarily have been eliminated.”

Pam Frache is the Ontario Coordinator of the Fight for $15 and Fairness. She says the response today has been tremendous. “People are really excited about the $15 minimum wage and fair scheduling rules that are coming January 1,” she said. “That’s why so many of the actions today were celebrating the 15-week count-down.” But since the Ontario Chamber of Commerce publicly demanded the new government repeal our new legislation in full, there’s been a real sense of urgency. More people than ever have joined the campaign.

Ontario Federation of Labour President Chris Buckley says union members have been part of the Fight for $15 and Fairness from the beginning, and many labour councils helped organize today’s actions. “Raising the floor of wages and working conditions is as good for the economy as it is for workers,” said Buckley. “That’s why the majority of Ontarians – including people who voted for Ford – expect the government to stand with workers; they don’t want the new government to cave in to pressure from corporate elites who clearly don’t have community interests at heart.”

When workers have money in their pockets, they spend it, explains Frache. “They don’t collude to cheat workers in price-fixing schemes or put it into off-shore accounts to avoid taxes like Loblaws did. Most of us just want to earn a living that brings our head above water and offers a modest amount of security. That’s not too much to ask for.”

Frache doesn’t think it’s a contradiction that supporters of the Fight for $15 and Fairness may have voted for Ford. “A good number of people voted for Doug Ford because they really believe he is going to stand up for us against corporate elites,” she said. “This is his chance to make good on that promise.”

Christine Ilott has big plans for how she’s going to use the $15 minimum wage when it comes in on January 1. She wants to go see a movie and maybe even splurge on popcorn. She wants to visit the dentist and buy a warmer coat. “We simply must get to $15 in January. It’s not much. But it will go a long way to lifting millions of us out of poverty. It's the right thing to do – and it's time.”