Media Release: Doug Ford fails Ontario workers with the passage of Bill 47, say leaders in the Fight for $15 and Fairness movement 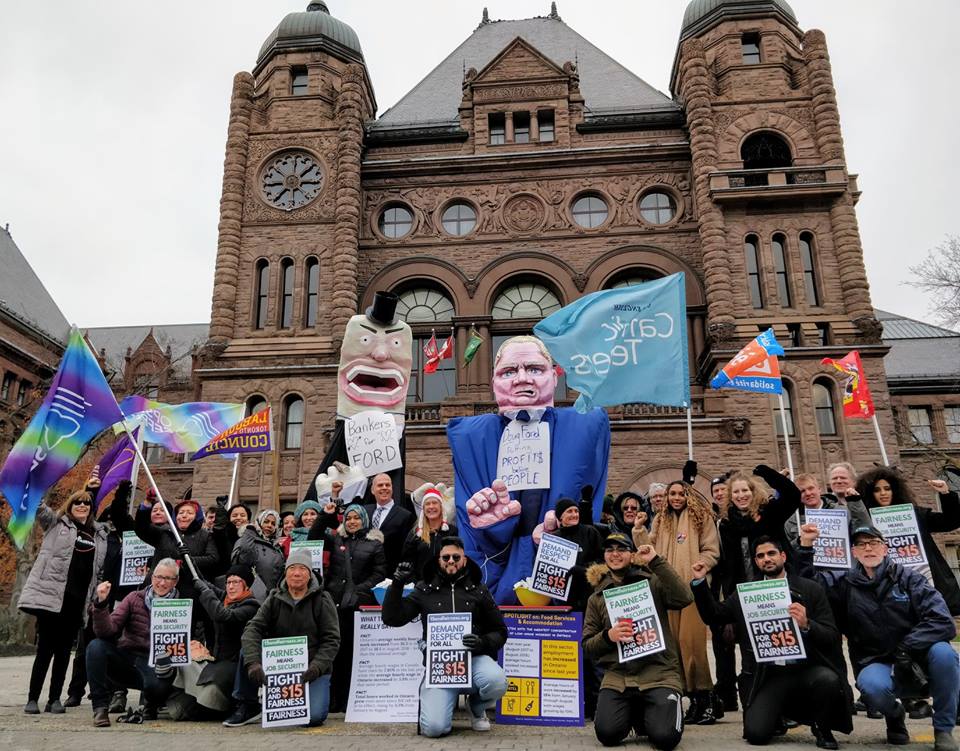 (TORONTO, ON) -- With the unconscionable passing of Bill 47, which takes away basic workplace rights from Ontarians, this government has shown again that it is governing for the few, making decisions without sufficient consultation and research that will drive millions of working Ontarians into poverty, say labour and community advocates.

“The Ford government is attacking workers across this province. Workers have been telling them what’s needed for a dignified life: workplace laws that offer protections based on the realities of modern workplaces and the very real need for a $15 minimum wage. Instead, this government has chosen to treat Ontario as if the laws of the 1990s will do the trick today. They won’t,” said Ontario Federation of Labour President Chris Buckley. “Passing Bill 47 leaves millions of Ontarians without the protections and wages that are needed for them and their families to thrive in our province.”

“It is clear that workers can’t count on their government to support them. Unions will. I urge all Ontario workers to join a union so they can collectively bargain better rights in their workplaces and keep fighting until these protections are the law for every worker in this province,” added Buckley.

The Ontario economy benefited from the labour law reforms introduced in 2017, with 83,000 new jobs created since the Fair Workplaces, Better Jobs Act came into effect.  Unemployment has also dropped to record lows, after minimum wage was increased to $14.

“Passing Bill 47 shows that this government is not considering the real-world effects of decent work laws, which have helped the Ontario economy,” added Buckley. “It also ignores the voices of the people who will be most affected by these laws – women workers, racialized workers, Indigenous workers and workers with a disability. Now, it will be much easier for unscrupulous employers to take advantage of their employees. I say shame on this government for the damage it has done to Ontario workers.”

“Under this new act, it will be at least 2025 before minimum wage workers see a $15 minimum wage, and by then it will be, once again, a sub-poverty wage,” said Pam Frache, Coordinator of the Fight for $15 and Fairness. “Doug Ford’s government is cutting our $15 minimum wage just six weeks before it was to take effect. To cut wages, to cut sick days, and to make it easier to fire workers who are already in precarious situations is cruel and callous in the extreme.”

“Removing equal pay for equal work provisions will increase the gender and equity wage gap, and intensify the discrimination that so many workers face in the labour market,” said Frache. “And it goes without saying that as long as employers are allowed to pay part-time staff less than their full-time counterparts, employers will have an incentive to create multiple part-time jobs instead of creating full-time ones.”

“We know that without strong workplace protections and a $15 minimum wage, workers’ health suffers. We hear from educators that students who face poverty face difficulty learning in school and themselves often work to supplement the low wages of their parents,” said Buckley. “By contrast, a higher minimum wage is good for workers, for the economy, and for our communities. That’s why the labour movement and communities are going to continue to push for changes, including a $15 minimum wage.”

To arrange interviews or for further information, please contact: