Media Advisory: “We do not consent to delaying $15 minimum wage until 2025” say students, at a first-ever high school protest of Ford government’s attacks on workers’ rights 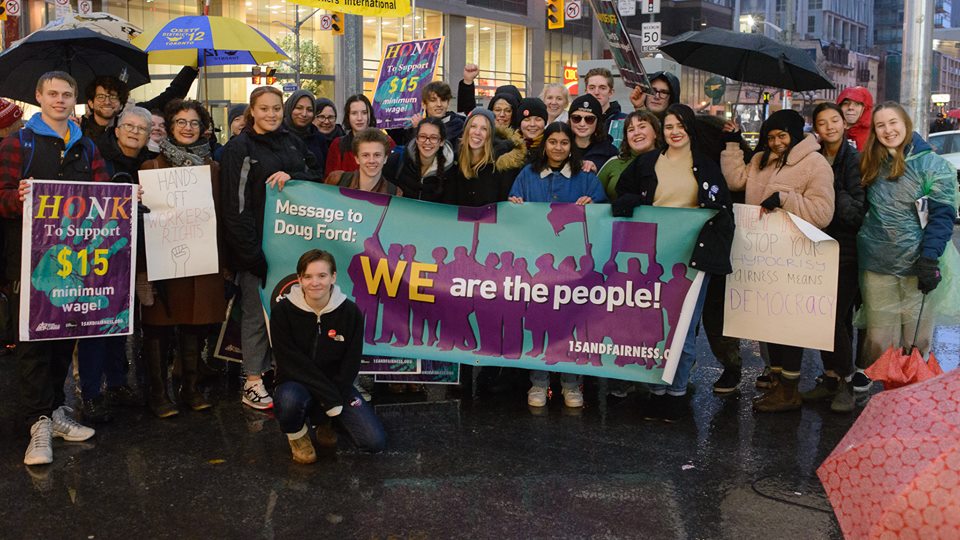 (TORONTO, ON) -- High school students, joined by teachers, will call on Premier Doug Ford to withdraw Bill 47 by organizing an action on Friday, November 9, from 4:00 pm to 5:30 pm at Toronto’s Bloor and Yonge intersection. What stands to be the first-ever high school student rally in support of a $15 minimum wage, comes at the heels of 50+ Ontario-wide emergency actions that were held in response to the introduction of Bill 47 on October 23.

Bill 47, currently in its second reading, seeks to repeal almost all of the new workplace protections that were adopted a year ago, including the $15 minimum wage that is still scheduled to come into effect on January 1, 2019 ($14.10 for students). If passed, Bill 47 would impose a real dollar wage cut for Ontario’s lowest paid workers by delaying $15 until 2025. The Bill would also eliminate the two paid sick days, reduce the number of unpaid personal emergency leave days, and make it easier for employers to fire workers who decline last minute shifts.

Students are holding the demonstration to call attention to the impact of poverty wage jobs. While parents juggle multiple jobs to pay the bills and tuition fees skyrocket, an increasing number of students are joining the workforce to help their families make ends meet.

When:  Demonstration on Friday, November 9, 2018 at 4:00 to 5:30 pm
Where: Northwest corner of the Bloor and Yonge intersection in Toronto
Speakers: High school students, teachers, community organizers will speak about the impact of Bill 47 and have media availability.