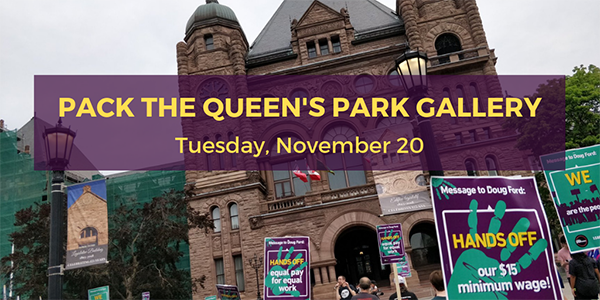 (TORONTO, ON) -- Supporters of the $15 & Fairness campaign and decent work laws will pack the Queen’s Park Public Gallery to witness the final vote on Bill 47 on Tuesday, November 20, as the Ford government’s controversial legislation gets debated for its third reading.

A Campaign Research Poll released last week showed that 77 per cent, more than two-thirds of Ontarians including 64 per cent of Progressive Conservative voters, opposed the elimination of paid sick days, which Bill 47 seeks to do. In another survey, released by the Canadian Medical Association, 8 in 10 Ontarians said, in reference to the Bill 47 provision that will allow employers to ask for sick notes, that if their employer required a sick note, they would probably come in to work when ill.

Members of Provincial Parliament are expected to debate the Bill one last time, between 3:00 pm and 5:00 pm on Tuesday, November 20, followed by a final vote. However, the Ford government has the power to change the timing of the debate at the last minute, to avoid public scrutiny.

If passed, Bill 47 would impose a real-dollar wage cut for Ontario’s lowest paid workers by delaying $15 until at least 2025. The Bill would also eliminate the two paid sick days, reduce the number of unpaid personal emergency leave days, make it easier to fire workers who decline last minute shifts and make it harder for workers to access union protection.

When:  Tuesday, November 20, 2018
Where: Public Gallery, Queen’s Park Legislature
Speakers: Community and labour advocates involved with the Ontario-wide $15 & Fairness campaign will have media availability after the vote on Bill 47.