International Socialists: Young Workers Assembly shares lessons on the Fight for $15 and Fairness 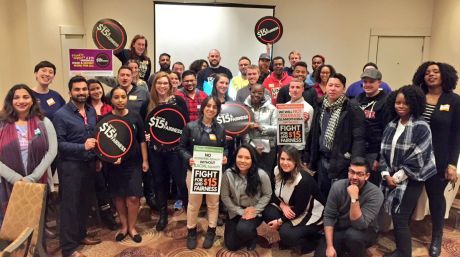 The gathering of more than 200 young workers at the Toronto Sheraton Hotel on Saturday, November 18 ahead of the OFL convention seemed buoyed by the recent announcement of the passing of Bill 148. It was an exciting chance to reflect on what can be learned from experience and how to strengthen and extend the recent victories going forward. The bill will raise the minimum wage to $14 an hour in January and $15 in January 2019, along with a host of other fairness provisions, regarding scheduling, unionization, time off work and equal pay. The fight it took to win these reforms has strengthened the power of workers across Ontario

The attendance demonstrated the diversity of the labour movement, with attendees from Toronto, Hamilton, Ottawa, Kingston, North Bay, Thunder Bay and elsewhere. Young workers represented CUPW, IATSE, IBEW, CUPW, UFCW, PSAC, Unifor, Unite Here, CUPE, and more. There was particularly good attendance from grocery and food service workers. The messaging from the invited speakers and participants in table discussions reflected the success of the Fight for $15 and Fairness campaign in pushing its message and just how much the campaign has done to help shape the agenda for labour in Ontario.

Through the workshops, table discussions and panels, a few key themes and lessons emerged that participants tried to tease out and generalize to help them in organizing their workplaces and communities:

Grassroots organizing
Lesley Jamieson, a member of PSAC and Kingston Fight for $15 and Fairness organizer, talked about the grassroots nature of the campaign and “starting from scratch in Kingston to take advantage of the historical opportunity presented by the Changing Workplaces Review” to fight for decent work. She and others repeated similar stories of a few like-minded people petitioning, knocking on doors, talking to co-workers, phone banking, leafletting, organizing meetings and demonstrating to pressure their MPPs to take action.

But what was especially striking about these stories was the way people in their ones and twos found another person to bring to a meeting or to make a call or to put up a poster; building trust-based face-to-face relationships in communities and workplaces to force MPPs to take the campaign seriously. We heard of medical providers taking up the call for paid sick days and better wages and workers incorporating the demands of the campaign into their bargaining.

Fight for $15 and Fairness and union activists talked about breaking out of a passive, service model of labour activism; instead making people aware that this was their fight and finding ways to involve them and give them agency in their own fight for decent work. The campaign emerged from workers themselves, around a demand that could inspire people but also one that seemed achievable. In organizing to win decent work, the campaign empowered low-wage workers to demand better.

As Hamilton city councillor Matthew Green emphasized in his keynote speech, “when conversations on labour only cater to a sector of unionized folks, we leave too much on the table.” The Young Workers’ Assembly, in content and form, showed some ways in which the fight for $15 and better working conditions has activated non-unionized workers in struggle and has helped to forge links between unionized and non-unionized workers.

Not falling for the elections trap
The assembly reflected the optimism of a movement that had just won a major victory, but there were no illusions about where that victory came from and what it would take to defend it. As Alia Karim of the York University Fight for $15 and Fairness group emphasized, “the victory is ours, it’s not from the Liberals. We fought for and won it!”

With the June 7 provincial election on the horizon, questions of how young workers should approach it informed much of the discussion at the assembly. While there were certainly NDP members in attendance, the prevailing message from participants throughout the event was not to endorse a party, but to set the bar and force the parties to meet it. The movement that forced Kathleen Wynne’s Liberal government to put forward Bill 148 did so by empowering other workers and community members to fight for an ambitious set of demands through demonstrations, strikes and campaigning, not by asking a political party to do it for them.

The threat posed by Patrick Brown’s Tories (who have promised to delay $15 until 2022) can best be defeated by maintaining an issues-based mobilization that forces parties that want the decent work vote to come and get it. As David Anderson from Unite Here 75, said “if we can show we are using the new labour laws to make people’s lives better we can beat Patrick Brown.”

Defend and Extend
The passing of Bill 148 has the potential to give unionized workers greater leverage and help more workers join unions. These ideas animated the conversation around “what’s next?”

The successful fight of food service workers at York University was cited by many as a useful example of how we can defend and extend the gains of Bill 148. The York food service workers built the demands of a province-wide movement into their contract demands and the solidarity of $15 and Fairness student groups helped mobilize support from students and other campus workers, put pressure on York University and win an impressive contract that had reverberations on other campuses and workplaces.

In strategizing on how to protect and expand the gains up to and after the election, many were intrigued by how to bargain and organize for $15 and Fairness. David Anderson emphasized the opportunities that the changes to the Labour Relations Act offered to the labour movement. Greater access to bargaining unit contacts with fewer requirements when forming a union, more mechanisms to force certification into the workplace and counter employer intimidation, and protect workers who try to form unions or go on strike. These changes offer opportunities to strengthen the labour movement and build workers’ power.

The sense of confidence and combativeness meant some participants saw these changes as weapons that could be used to fight Islamophobia and white supremacy. The connections between increased leverage for workers to leave abusive employment, fighting to make all jobs decent jobs and the centring the experiences of the most marginalized in an active fight to smash divisions between workers while empowering new leadership in the movement were made throughout the assembly’s discussion.

The Young Workers’ Assembly brought together young workers, organizers and leaders that have the potential to transform the class struggle in Ontario. By becoming leaders in our workplaces and activating that next layer of co-workers and neighbours, we can win much more than Bill 148 and have the fighting labour movement we want and need.