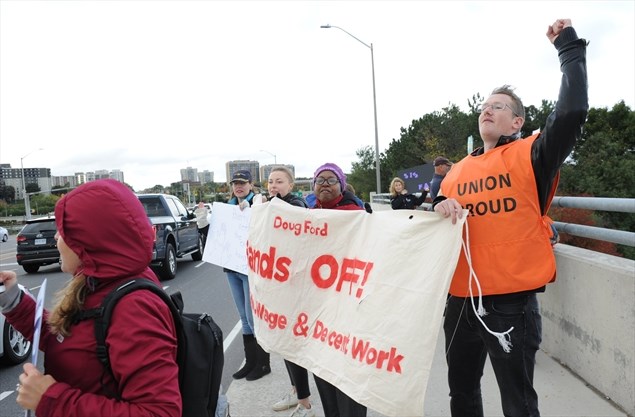 A group of residents concerned about the future of worker’s rights in this province took to the streets of Oakville to make their voices heard on Monday, Oct. 15.

Around 20 people participated in a late afternoon protest on the Trafalgar Road QEW overpass in defence of Bill 148, the Fair Workplaces, Better Jobs Act.

The act, which was put in place by the previous Liberal government, would introduce a $15 minimum wage starting Jan. 1.

Other features of the act included requirements that employers:

•pay part-time, casual, temporary and seasonal employees the same rate as regular employees when they perform substantially the same work.

Ontario Premier Doug Ford has pledged to scrap the bill and freeze the minimum wage at $14-an-hour.

At the Oakville protest residents waved signs reading “$15 is fair” and “Sick Days.”

The group also hung a banner from the overpass stating they were proud to support a $15 minimum wage and decent work for all.

Oakville resident Pat Robinson said she was participating in the protest because Ford scrapping the bill would impact the students at the adult education centre she teaches at.

She said the students need those paid sick days so they can take time off when they are sick without financial hardship.

She also pointed out that some of these people have jobs as food handlers and as such are not really people one wants coming to work when they are sick.

“Those other parts of the bill beyond the minimum wage increase are basic human rights,” said Robinson.

The Oakville teacher also disputed Ford’s claims that Bill 148 is a job killer noting that her husband is a small-business owner who pays his employees $15-an-hour.

“Your business model should be able to afford to do that,” she said.

She said the group is there because it believes in a $15 minimum wage and decent work for everyone.

“We’re fortunate our affiliated groups belong to unions and we have unions to bargain for us and get us decent wages and benefits, but there are lots of people out there, our daughters and sons, our families, our friends, the people in the community, who don’t have that and we think that’s wrong,” said Weinberger.

“Everyone should have the right to decent work, decent pay and a decent life. That supports all of us. We spend our money in our communities and that creates jobs and gets our economy working well in our communities.”

Weinberger said her daughter runs a small business and pays her employees well above minimum wage.

The Oakville protest was part of a larger day of action, which saw demonstrations organized by the Ontario Federation of Labour in more than 20 Ontario municipalities.

Read the Inside Halton full story