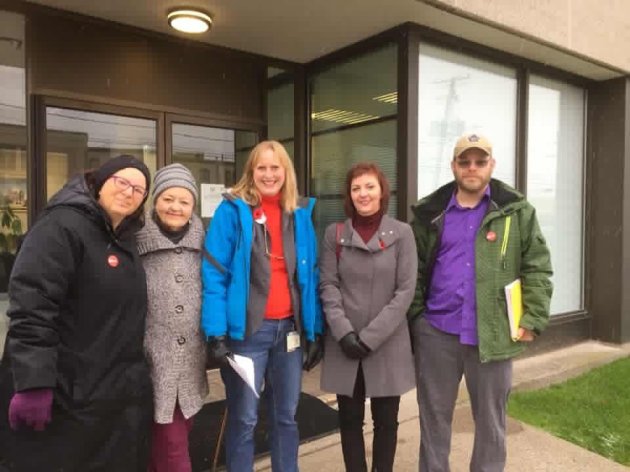 A meeting with Ross Romano was unproductive, his Sault Ste. Marie constituents say.

Constituents say a Progressive Conservative MPP — who told the legislature he's gotten "nothing but compliments" on the provincial government's new labour bill — has ignored their concerns.

Sault Ste. Marie MPP Ross Romano spoke about Bill 47 only once in the legislature. Called the Making Ontario Open For Business Act, it repeals many of the labour reforms introduced by former premier Kathleen Wynne. It passed its final reading on Wednesday.

One week earlier, constituent Mike McCleary emailed Romano a detailed list of his concerns about the law. He didn't get a response.

"The fact that he says we're just complimenting it blindly, it's insulting," McCleary told HuffPost Canada. "It shows what he really thinks of the working class community here."

The father-of-two followed up with messages to Romano on Facebook and Twitter, and another email. This time he copied NDP leader Andrea Horwath and a CBC News reporter. He heard back in an hour.

"It didn't really seem like a coincidence that when I copied the Opposition leader and a couple media sources, I got a response back so quickly."

Eventually, Romano agreed to meet with McCleary and some others who were worried about the bill on Nov. 6.

"I'd say it was overall pretty unproductive," McCleary said of the meeting. "I had asked him for specific answers on things, but [got] mostly political answers dancing around."

In the meeting, Romano said again that he has heard no complaints about Bill 47, according to Tara Maszczakiewicz, regional vice president of the Ontario Public Service Employees Union, who was there. Her union has been unequivocally critical of the bill.

"I don't know where he is, if he hides from social media, or what," Maszczakiewicz told HuffPost Canada. "But there were people outside his office protesting on the Tuesday, in the pouring rain, before we met with him on Friday."

Approached at Queen's Park on Wednesday, Romano told HuffPost Canada he couldn't take questions because he had a meeting. His staff has also not replied to a request for comment.

McCleary is concerned about how the bill's changes to leave and doctor's notes will affect workers.

The bill scraps a rule that employees have to give workers two paid sick days a year, and lowers the total number of days off from 10 to eight. It also rescinds a rule forbidding employers from requesting a doctor's note after an employee takes a sick day.

"I don't want to go sit in the doctor's office for four or five hours to get a doctor's note because I had to take a little bit of time to take care of myself," McCleary, who works evenings at a call centre, said.

He said that the transit system in the Sault isn't very good, so people who need a doctor's note may have to choose between sitting on the bus for hours or paying for a cab. A cab across town costs about $20, he said, and doctor's offices usually charge at least $10 for a note.

"When you're talking about a low-income family, that could be the difference between a couple of meals," he said.