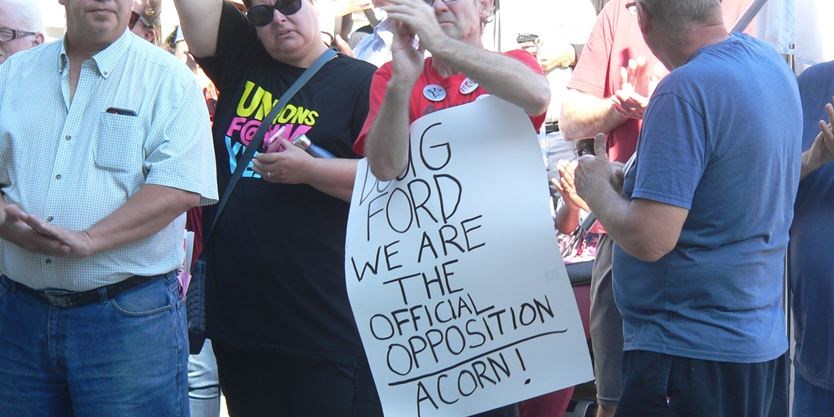 If Premier Doug Ford can use the notwithstanding clause to push through his agenda, the labour movement will have in reserve its own general-strike strategy as a counter move, said Anthony Marco, president of the Hamilton and District Labour Council.

“It took years to build up to the Days of Action, when people were prepared to do what they had to do,” he said. “(Ford) has to understand we have in our back pocket the general strike that we can shoot down the premier. We can shut this city down. We can shut this province down.”

However, before Ontario’s labour movement can pull out what Marco called an extreme tool, the Sept. 15 Hands Off Hamilton rally at city hall demonstrated the first of what labour, poverty and environmental activists hope to be a growing community that will become the bulwark against the Progressive Conservative government’s agenda.

Speaker after speaker railed against cuts to mental health, changes to the sex-education curriculum, and the expected gutting of the former Liberal government's labour legislation that, among other things, extends sick days and raises the minimum wage to $15 per hour on Jan. 1, 2019.

Marco said later that the growing opposition to Ford’s government is different from any protest movement in the past. The rally, organized by the Hamilton and District Labour Council and the Ontario Federation of Labour, was part of a provincewide series of actions by labour activists.

“This isn’t a specific thing we are targeting,” he said. “We are targeting somebody who is very symbolic of a lot of the ills that are going on.”

Lee Reed of the Hamilton Tenants Solidarity Network, which is involved in a rent strike in Stoney Creek, said Ford is a “trumped-up Harris,” referring to former PC premier Mike Harris.

The public can’t rely on politicians or governments anymore, he said, and must band together and organize for themselves.

“It’s a capitalistic system that has left out the working class,” Reed said.

Despite the turnout, the people who attended the event seemed motivated to build upon what Marco called a growing movement. He pointed out that next year is the 100th anniversary of the 1919 Winnipeg General Strike, which laid the foundation for future labour reforms in the country.

“If it takes a year or two to get there, people will eventually get there.”