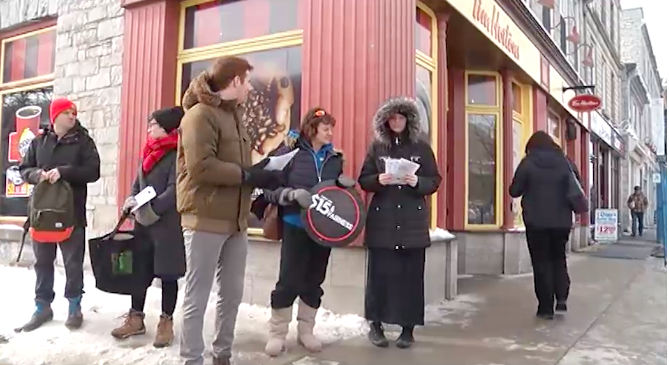 The rally was held in response to the chain’s recent cuts to employee’s hours and benefits.

“To let them know that we support them in spite of the cuts that a lot of Tim Hortons workers have been seeing,” said Lesley Jamieson with the Kingston and District Labour Council. “You know, one of the largest public sector employers in Kingston has been cutting paid breaks, has been reducing full-time hours from 40 to 32 hours.”

Across town, it was a different story. Living Wage Kingston honoured four local employers for their commitments to pay their employees a living wage or higher. The organization says according to their calculations, the living wage in Kingston is $16.58 an hour — that’s based on a family of four with two working parents.

“On Jan. 1, you know the minimum wage went up enough to get people to the poverty line and you know certain employers have unfortunately taken steps to put people back below it again,” said Cam Jay, co-chair of Living Wage Kingston. “Forty per cent of the working people in this town make less than $30,000 a year.”

Open Door Media has only been around for three-and-a-half years but CEO Ben Bowen knew right away he needed to pay more to attract the right employees.

“You either manage your expenses to the bottom which is paying your people as low as possible, minimum wage would obviously be that basement, or you go out and get the best people and the best people are not cheap,” said Bowen.

Loving Spoonful has been paying a living wage for the last three years and executive director Mara Shaw says staff are sticking around because of it.

“I can tell you that no one has quit since we’ve done that, you know people aren’t leaving so we have no staff turnover, we’ve got really highly-engaged staff that are sticking around,” said Shaw.

“It is a movement and I think it’s gaining energy and other organizations are starting to note that it’s just the right thing to do. We acknowledge that it’s not as easy for every business to do something like this but for those who can and are putting more thought toward it, it’s just wonderful for Kingston,” said Bell.

And while Living Wage Kingston honours those employers who go above and beyond for their staff, the Kingston and District Labour Council says it will continue to fight for better wages and working conditions for all.