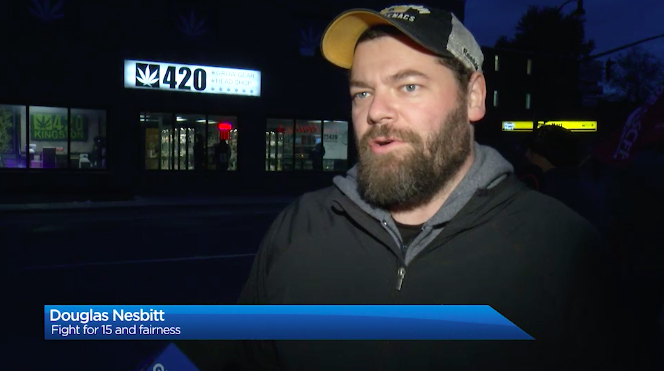 Nearly fifty people gathered in front of a Tim Horton's Thursday, speaking out against sweeping changes to bill 148. This includes freezing minimum wage and scrapping a number of provisions meant to help workers.

Nearly 50 people gathered at a Tim Horton’s in Kingston to speak out against the Ford government’s announcement of sweeping changes to the labour reform bill.

The protest was one of many happening across the province.

In Kingston, representatives from a number of labour unions showed up in support of those affected by the proposed changes.

On Tuesday, the Ford government announced an action to repeal several measures in the Fair Workplaces and Better Jobs Act, including freezing the minimum wage at $14 an hour. It had been slated to increase to $15 an hour by 2019.

On Tuesday, the Ford government introduced a new bill with a slew of changes that will scrap labour reforms put into place by former premier Kathleen Wynne’s Liberal government.

The new bill will see the bulk of the Liberals’ changes scrapped. Since the implementation of Bill 148, Jamieson says workers were seeing improvement in employment conditions.

“They are seeing personal emergency days for the first time,” Jamieson says. “There is a sense that their work is appreciated and valued in the workplace.”

But with the repeal, several reforms will be changed — like two paid sick days — and freezing the minimum wage at $14 an hour until 2020.

The legislation brought in by the Liberals also required employees to be paid for three hours if their shift is cancelled within 48 hours of its start, and giving them 10 emergency leave days per year, two of them paid. Jamieson says repealing the bill and replacing it with one that takes away everything gained to make workplaces better is a step backward.

“We’re going to see less money staying in Kingston, more money leaving and going into the pockets of those who don’t need it.”

Kingston resident Doug Nesbitt helped start the “Fight for 15 and Fairness” campaign in the region. Nesbitt has worked in a variety of minimum wage jobs throughout his life and says the decision to repeal is not for the people.

“I think it’s kind of a cruel decision by the government to do this,” Nesbitt says. “I think they are listening to the business lobbying.”