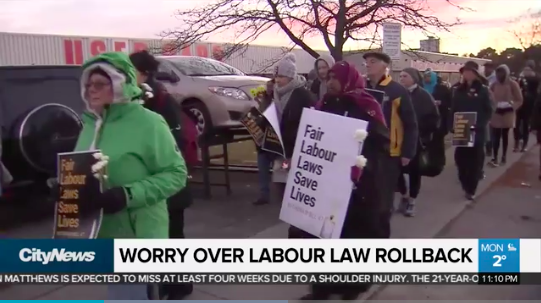 The death of a temporary worker last week at a loading dock in North York has some opposition MPPs questioning the Ford government’s commitment to workplace safety.

The Ministry of Labour is investigating the death of the worker — a man in his 40s — who was pinned between a truck and loading dock near Keele Street and Steeles Avenue on Thursday night.

He was working for Upper Crust, a company affiliated with Toronto-based commercial bakery Fiera Foods, which has been investigated for three previous workplace deaths.

Proactive workplace inspections by the Ministry of Labour have also been scaled back by the Ford government.

For Fraser it adds up to more protections for companies, and less for their employees.

“When somebody goes to work, their family expect them to come home,” Fraser said. “The protections that were put forward in Bill 148 … are key to promoting worker safety, and key to keeping people alive while they’re at work. The government is going backwards …they are not making Ontario’s workplaces safer.

“It’s not every workplace that needs a proactive inspection, but there are certainly some that do,” he added. “So the government shouldn’t be rolling these back, they should be fulfilling these commitments that were made in legislation to ensure that workers are safe.”

“Part of us fighting to try and improve basic protections was Bill 148…now what we are seeing (is) the Ford government introduce Bill 47 to take away all those protections,” said Deena Ladd, executive director of Workers Action Centre.

“Another shocking part of Bill 47 is the government is reducing penalties for companies that break the law and freezing the amount of employment standard officers to do those proactive inspections.

“I think that is going to send a huge message to companies who are routine violators … that it doesn’t really matter if you break the law, the penalties won’t be that much. I just find that absolutely shocking.”

NDP MPP for Spadina-Fort York, Chris Glover, believes the recent workplace death, the fourth linked to Fiera Foods, is a red flag that can’t be ignored.

“Obviously, with what happened — the fourth death at that company — there is a strong indication that we need stronger worker protections at that company,” he said. “We need more inspectors to go in and make sure that that workplace is safe, that this isn’t going to happen again.”

Fiera Foods was fined $300,000 in September 2017 after the death of a temporary worker whose hijab became entangled in a conveyor belt.

In 2011, a 69-year-old man was struck by a car and later dragged by a tractor-trailer in the parking lot of another Fiera affiliated company.

And back in 2002, Fiera was fined $150,000 following in the death of a 17-year-old temporary worker who was crushed while cleaning machinery.

Upper Crust’s President Carmela Serebryany released a statement to CityNews stating they will continue to cooperate with the police, the Ministry of Transportation and the Ministry of Labour as they investigate.

“Last week, the Upper Crust bakery family tragically lost one of our team members in an accident at the outdoor loading dock area of our property in North York.  We are deeply and profoundly saddened by this sudden loss. Our thoughts and prayers are with the victim’s family and loved ones. We will continue to work in full cooperation with police, the Ministry of Transportation, and the Ministry of Labour as they investigate the issue and speak with all relevant parties. Upper Crust bakery supports measures to ensure a safe workplace and fairness for workers. While we hope to add our voice to a constructive debate about ways to make workplaces safer in due course, we are at present observing respect for the deceased.”

Glover puts some of the onus on the government to assure workplaces are safe for all employees.

“Right now, there’s a family who is absolutely devastated, who has lost a loved one, and they are going through that grieving process and it’s the fourth time it has happened at that company,” he added. “So the government really needs to step up, get their inspectors in there, find out what’s happening, and make sure something like this never happens again.”

Minister of Labour Laurie Scott said the latest death was being investigated, and acknowledged Fiera Food’s history, but said she couldn’t comment beyond that.

“I know there’s the history there (with Fiera Foods), but the Ministry of Labour is investigating and I can’t comment on investigations.”