CBC News: Boosting the economy from the bottom up': Why minimum wage hikes are a good thing 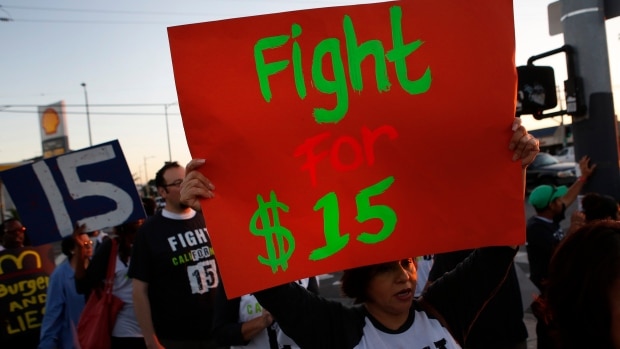 'If you boost minimum wages you are boosting the economy from the bottom up,' economist argues

Critics of Ontario's recently announced move to raise the province's minimum wage to $15 an hour say it will hurt businesses and lead to job losses. But an analysis of more than seven decades of data out of the U.S. suggests the opposite is more likely to happen.

On Tuesday, Premier Kathleen Wynne announced that the minimum wage will rise to $14 an hour in 2018 and $15 in 2019, which prompted howls of protest on behalf of businesses.

The Canadian Federation of Independent Business says that small businesses will be forced to cut staffing as a result, and the Ontario Chamber of Commerce warns that the move will discourage investment from corporations, which grows the economy for everyone.

But a recent analysis from the Washington-based National Employment Law Project (NELP) says that more often than not, minimum wage hikes create far more jobs than they kill, about 12 months down the line.

"The negative impact on jobs is unlikely to be negative overall," said Yannet Lathrop, a researcher and policy analyst with the organization.

Policy analyst Yannet Lathrop says even industries that have a lot of low-wage workers, such as retail and hospitality, tend to show employment gains after a minimum wage hike. (National Employment Law Project)

To reach that conclusion, Lathrop and others took official government data from between 1938 and 2009 — a period in which the U.S. hiked the federal minimum wage 22 times, from 25 cents to $7.25 an hour.

Rather than killing jobs, the analysis found that 68 per cent of the time, the employment rate was higher 12 months after the wage hike than it was before.

Proponents of minimum wage hikes argue they are a net positive for the economy, as they give a large number of low-paid workers more money, which they are more likely to go out and spend. That, in turn, grows the economy enough to offset the added costs for businesses. Or so goes the theory.

NELP's number-crunching suggests that more often than not, the argument holds water.

During the 71-year period studied, an increase in the federal minimum wage led to job losses only eight times. And "those declines were likely driven by factors other than the higher minimum wage," the report found.

In five of those instances, the U.S. economy was in a recession at the time. Twice — including most recently, after the Great Recession in 2010 — it was still recovering from one. And once, in 1957, it was headed into one.

That's not to suggest that some businesses might not close up shop when faced with higher costs, or at least cut back on their hiring plans. But suggesting that wage hikes will be bad across the board is based on "a more simplistic understanding of economics," Lathrop said. "The numbers don't back it up."

"There may be some businesses that you may see close down," Lathrop said. "But on net, the employment impact tends to be positive."

Independent economist Armine Yalnizyan concedes that some job losses are to be expected, but those victims would just as likely have been pushed under by other factors, such as rising gas or electricity prices, or other input costs.

"Yes, it will add costs," she said, "and yes that will mean job losses at the edge." But even if the long-term impact on jobs is no better than "a wash," there are other sound economic reasons for Ontario to hike its minimum wage.

Almost one-third of the province's workers currently earn less than $15 an hour, Wynne noted in announcing the plan. Yalnizyan says that's bad for productivity, which is one of the key drivers of improvement when it comes to raising the standard of living.

"You get very poor productivity when you can coast on the fumes of just hiring cheap labour," Yalnizyan said. "Raise the cost of labour and you'll suddenly see businesses trying to do more with less."

And in contrast to the apocryphal mom-and-pop shop forced to shut down and fire workers because of higher costs, more than half of the minimum wage workers in Ontario work for companies that employ more than 500 people.

"This is big business," Yalnizyan said. "Why are we protecting these ... employers?"

Raising wages for workers at the lowest end of the pay scale is especially helpful, she said, as consumers shoulder so much of the economic load. Statistics Canada data released last week showed that more than half of Canada's economy is now powered by consumer spending, as business investment and exports have dried up.

"The people who spend virtually every penny they make are people at the bottom of the wage spectrum," Yalnizyan said. "If you boost minimum wages, you are boosting the economy from the bottom up."